The UK newspaper the Daily Mail published the alarming allegation that the 16 biggest ships in the world produce more pollution than all the world’s cars. If true, this would certainly change many people’s perspective on global warming as more often than not cars are singled out as a key contributor to greenhouse gases whilst the shipping industry is almost never mentioned. So, is this allegation true? And, if so, is it a game changer for the way in which we tackle climate change? 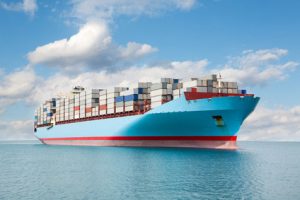 It’s all in the oxides

The short answer to the question, ‘is this allegation’ true is, quite simply, ‘yes’. And this is because of the higher levels of sulphur oxides (SOx) and nitrous oxides (NOx) that large container vessels produce when compared to cars. It is certainly true that the world’s largest container vessels produce more SOx and NOx than all the world’s cars. This difference in oxide emissions is exacerbated by the fact that modern cars are designed to be cleaner and greener and to produce fewer emissions. Simultaneously, however, container ships are producing more and more emissions. The gap is widening.

SOx and NOx are very harmful to the environment in many different ways. For example, the two key causes of acid rain are – you guessed it – suphur dioxide and a variety of nitrous oxides. These oxides can also dramatically adversely effect ecosystems. For example, they can kill marine life and cause respiratory illnesses in humans.

Why have container ships been permitted to emit such high levels of oxides?

The widening gap, mentioned above, between the emissions from cars and the emissions from container vessels, was enabled by the fact that the maritime industry was subject to fewer curbs on on its emissions. It is at this point that it is useful to put the Daily Mail article in context. At the time at which this article was written, the maritime industry was subject to many fewer curbs on its emissions than it is now – since then, maritime emissions have been clamped down on. See bid to clamp down on emissions.

The delay in this clamp down could be due to several factors. It can be speculated that it is due to a desire not to limit the profitability of this industry, for example. However, clamping down on emissions in the maritime industry may not be enough. Ships, and particularly container vessels, are getting bigger and bigger every year. And, as they get bigger, they emit more SOx and NOx. The rate at which they grow may outstrip the curbs on their emissions placed upon them by legislation, making such curbs ultimately ineffective.

What can be done to reverse this trend?

It is not all doom and gloom, however. Advances in technology have paved the way to create low emission ships. Much in the same way as car emissions have been cut down, simply by installing different types of engine, without significantly impacting on our driving habits. The key technological advance that is of relevance to the shipping industry is Liquid Natural Gas, or LNG. In fact, it can be argued that switching all maritime vessels over to LNG as their main fuel would represent the single biggest technological advance in the shipping industry of the last 100 years.

The problem is that currently ships – and particularly large container vessels – tend to use fuel oil and diesel as their sources of fuel. Oil and diesel produce large amounts of SOx and NOx when they are burned. This is the reason why the 16 largest ships in the world produce more of these oxide emissions than do all of the cars in the world. A very simple way to solve this issue would quite simply be to switch shipping fuel to Liquid Natural Gas.

The short answer to the question posed above, was that article in The Daily Mail factually accurate,  is yes, it seems so. The 16 largest ships in the world do emit more SOx and NOx than all the world’s cars. But, the good news is that there may be a solution here in the form of Liquid Natural Gas. Switching the maritime industry’s fuel source to LNG would substantially decrease its emissions.